Association Between Vaccines and Autism: Have an Opinion Do You?

So now that the Covid vaccine response has opened people’s eyes a bit with some red pilling, I’m going to wade into the autism vaccine arena. People have incredibly strong feelings about this topic. Did you have a gut reaction reading the article title? If so, the propaganda campaign (for either side) has probably worked on you.

If you were ready to yell out that it’s crazy to suggest a potential link between autism and vaccines, let me ask if you’ve done your research or if you’re just parroting the MSM? I’m not saying vaccines cause autism, but I’m amazed that so many people are so damn sure that there’s no possibility to be explored. It’s become a taboo subject… much like questioning the science for masking. The coordinated response between Big Pharma and the Government over Covid should be a wakeup call to us all to do our own homework.

I’ve done mine. I’ve read hundreds if not thousands of journal articles on autism. I’ve authored articles and am currently leading an autism study being conducted across several states plus DC. Before someone throws out the appeal to authority fallacy, I’ll say that I don’t know and I am certainly not an authority. I only mention this to point out that I’ve spent years closely researching this topic and I still don’t know if there’s a link or not. How can those without the same effort make such definitive statements on this subject?

I do have a child with autism. I’m as certain as I can be that vaccines did not cause it. Why? Because my wife (a clinician who has treated hundreds of pediatric patients with autism) and I purposely delayed and modified the vaccine schedule out of caution. However, our shared best guess is that autism is currently used as an umbrella diagnosis for several different disorders that present similarly. Some cases may be genetic while others may be environmental in origin.

The Hannah Poling case set my radar off and helped launch my interest into autism research. If you haven’t read the original published case and have an opinion on this, read the case. Just read it. Then understand that this exact case is repeated with thousands, if not tens of thousands, of families every single year. A child is typically developing, receives multiple vaccine injections at once, has a bad reaction, and then suddenly regresses into autism.  It’s literally overnight and we’re talking about going from dozens or even hundreds of words to essentially becoming non-verbal. Does that not sound odd to you? Forget about the term autism. Wouldn’t you just want to know what the fuck is going on with your child? I would think so, yet we have the Las Vegas shooter aura of silence around this phenomenon that occurs following vaccination. Hannah Poling’s father, a dual MD and PhD from the Department of Neurology and Neurosurgery at Johns Hopkins, has been ridiculed for writing that article. If he hadn’t stepped up to take the hit and get it published, the whole phenomenon would have simply been summed up as something in crazy parents’ heads who are looking for someone or something to blame. Here’s an excerpt:

A 19-month-old girl was born after a normal full-term pregnancy. There was no family history of autism or affective, neuromuscular, or hearing disorders. Her development was progressing well, with normal receptive and expressive language and use of prelinguistic gestures, such as pointing for joint attention. Imaginary play and social reciprocity were typical for age. She used at least 20 words and could point to five body parts on command. Several immunizations were delayed owing to frequent bouts of otitis media with fever.

Within 48 hours after immunizations to diphtheria, tetanus, and pertussis; Haemophilus influenzae B; measles, mumps, and rubella; polio; and varicella (Varivax), the patient developed a fever to 38.9°C, inconsolable crying, irritability, and lethargy and refused to walk. Four days later, the patient was waking up multiple times in the night, having episodes of opistho-tonus, and could no longer normally climb stairs. Instead, she crawled up and down the stairs. Low-grade intermittent fever was noted for the next 12 days. Ten days following immunization, the patient developed a generalized erythematous macular rash beginning in the abdomen. The patient’s pediatrician diagnosed this as due to varicella vaccination. For 3 months, the patient was irritable and increasingly less responsive verbally, after which the patient’s family noted clear autistic behaviors, such as spinning, gaze avoidance, disrupted sleep/wake cycle, and perseveration on specific television programs. All expressive language was lost by 22 months.

Now 6 years old, our patient has been treated with vitamin supplements since 2½ years of age. Even before starting supplementation, the patient began speaking again at 23 months old and had a four-word vocabulary of “bubbles,” “ball,” “drink,” and “cracker.”

Autism prevalence has been increasing in recent years with 1 out of 54 children diagnosed. I’ve often heard it asserted that the increase is just due to a change in diagnosis criteria, but that’s not really true. There is a substantial increase due to changes in diagnostic criteria, but this doesn’t come close to accounting for the entire increase (King & Bearman, 2009). I’ll say it again that I don’t know for sure one way or the other, but I do lean towards a percentage of the population (~2%) having a mitochondrial disorder that does not react well with an overload of vaccines. I’m guessing most Glibs may be used to older CDC schedules of around 7 doses and not realize that children are currently pumped with 28 doses by 15 months and ~40 doses by 6 years (I lost count, could be more… the below graphic notes children are currently mandated to receive 53 injections of 71 vaccine doses by age 18) . Look at how many shots 19-month-old Hannah Poling received all at once: diphtheria, tetanus, and pertussis; Haemophilus influenzae B; measles, mumps, and rubella; polio; and varicella (Varivax). Most children (~98%) may be fine with this barrage of shots, but even the hypothesized reaction of just 2% with the mitochondrial disorder would be enough to send autism rates skyrocketing to the current prevalence. But don’t take my word for it, take Julie Gerberding, the 2002-2009 director of the CDC, in her own words during a CNN interview:

Gerberding: “My understanding is if a child has what we think is a rare-mitochondrial disorder and when children have this disease and anything that stresses them creates a situation where their cells just can’t make enough energy to keep their brains functioning normally. Now we all know that vaccines can occasionally cause fevers in kids. So if a child is immunized, got a fever, had other complications from the vaccine, and then if your predisposed with a mitochondrial disorder then it can certainly set off damage… some of the symptoms that can have characteristics of autism.”

Gupta: “…. Are we ready to say right now, as things stand, that childhood vaccines do not cause autism?”

Gerberding: My understanding is that if the child has what we think is a rare mitochondrial disorder, when children have this disease anything that stresses them causes a situation where their cells can’t make enough energy to keep their brain functioning normally. Now we all know that vaccines can occasionally cause fevers in kids, so if the child was immunized, got a fever, had other complications from the vaccine, then if you’re predisposed to the mitochondrial disorder, it can certainly set off some damage. Some of the symptoms can be symptoms that have characteristics of autism.”

I mean come on. I get the hesitation to say that vaccines can cause autism, but that’s exactly what the CDC director is saying here. I’m not there myself. Just because a CDC director says so, doesn’t make it true. But we’re really going to immediately dismiss it as a wacko conspiracy theory when you have the head of the CDC making statements like the above in bold?  If this is truly the case, there has been a systematic harm perpetrated by the United States government for decades that may be unparalleled in human history in terms of the number of children injured.

Gerberding: “What we can say absolutely for sure is that we don’t really understand the causes of autism. We have a long way to go to get the bottom of this. But [15 government-funded studies have concluded that] there is no association between vaccines and autism.”

So the CDC has absolutely no idea why autism occurs, except that it can’t possibly be from vaccines (even though the CDC just laid out a very specific mechanism of action for how this can happen) because government-funded studies concluded this wasn’t the case. Hmm, government-funded studies have also shown that Covid vaccines are already the safest and most effective vaccines in medical history. It’s also very important to note that the vast majority of studies on vaccines only consider the effects of administering a single dose at a time and do not evaluate the safety of multiple injections at once in an infant. Yet the Science is Settled™. Sounds familiar, doesn’t it? For transparency, I transcribed this interview for the article, so it may have minor errors in phrasing. If someone is able to download this interview and send to me on the forum, I would appreciate it. I have a feeling it is only a matter of time before this interview is memory holed.

Following this interview, Gerberding left the CDC in December 2009 to become president of Merck’s vaccine division. Are you starting to see the incestuous relationship between Big Pharma and the CDC who mandates vaccines? The CDC schedule is like giving Pharma their own printing press. I’ll note again that the graphic below shows children are currently mandated to receive 53 injections of 71 doses by age 18. In contrast, I received ~7 injections during my childhood and Gen X isn’t exactly dropping dead from communicable diseases. 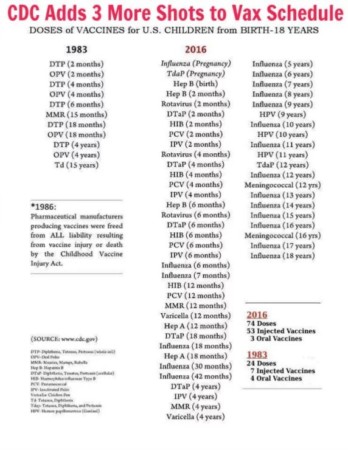 Note: Links to the actual 1983 and current CDC schedules are provided earlier in the article.

I’ll end with this, autism used to be noticed and diagnosed around 3 years or so. With attentive parents and a knowledgeable PCP, it can now be diagnosed around 2 years or even earlier. Vaccines are currently being pushed earlier and earlier. It’s been theorized in some circles that the schedule was intentionally accelerated to confound any connection with autism. I don’t know if that’s true and it would certainly have seemed insane to suggest even a couple years ago. I’m not so sure it’s farfetched anymore with watching the response to Covid. It’s eerily like the rush to vaccinate everyone for Covid so there’s no control group that can be compared against. It’s just not possible to compare the autism rates of a 1983 vaccine schedule group of toddlers with another group receiving the current schedule in a randomized controlled trial. Regardless of the reason for the acceleration, there is evidence to suggest that injecting infants and toddlers with dozens of vaccines can cause stress, which could initiate the reaction that CDC director Gerberding mentions above in children with mitochondrial disorders. We chose to follow the 1983 schedule for our own children, add in some of the newer vaccines on a delayed schedule, and reject others like the Hep B vaccine which was originally intended only for the children of intravenous drug users and whores.

What say you? Is this still a taboo conspiracy theory that has no place on Glibs? Or are you interested in additional articles that start exploring the scientific evidence? If there is a serious interest, I’ll start compiling what I have in follow-up articles. I’ll warn you in advance that evidence is not overwhelming, but neither is it non-existent. I’ll go back to my early statement that I don’t know. I’ll also note that the sponsors funding these studies would face devastation from finding such connections.