It’s long been my theory that soldiers haven’t changed all that much over the millennia.  Their gripes, their simple pleasures, their penchant for complaining and analyzing the shortcomings of their superiors, their displeasure over drawing shit details, all of those surely go back as long as there have been organized militaries.

So, to that end, I present for your consideration a proposed conversation between two common soldiers in the Greek Army, around 3,200 years ago. 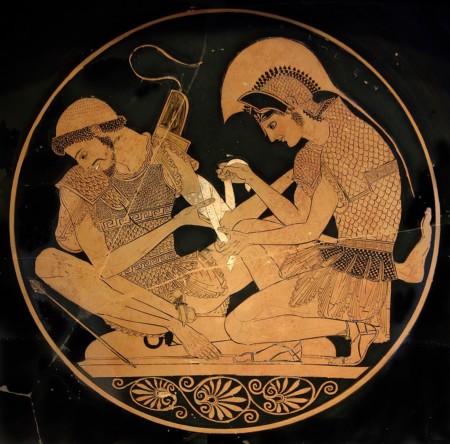 The year is 1180 BCE.  The scene, a beach, over which looms a great walled city – the legendary Troy.

Two Greek soldiers, Rufus and Melene, are working on a construction project, just outside the city walls.

They work for a while in silence.

RUFUS:                 “Yeah.  Supposedly, we’re going to leave this thing on the beach with a hundred armed guys inside, and the rest of us make like we’ve left, see?  The idea is that the Trojans will take this thing as a gift and take it inside their city walls.  Once it gets dark, and everybody goes to sleep, the soldiers jump out.  Kill the guards, throw open the gates.”

MELENE:              “Ain’t any way the Trojans will be that stupid.  Come on, Rufus, we’ve been out here laying siege to their city for like ten years now, and they’re supposed to look out tomorrow morning and see this and be all like, ‘Oh, look, the Greeks are all gone, and they left us a present – let’s take it inside the city!’  Come on, Trojans ain’t always the sharpest knives in the drawer, but they ain’t that stupid.  How do you think the history scrolls will describe that in a hundred years?  ‘Beware of Trojans, they’re complete idiots?’  Old King Priam ain’t gonna be that crazy.”

RUFUS:                 “How else do you think he got up in the ranks that quick?  Odysseus has the biggest brown streak on his nose in the whole Army, except for maybe Achilles.  And Ajax?  What an asshole.  All of ‘em kissing King Agamemnon’s ass.”

MELENE:              “Yeah, and don’t forget, we’ve been out here for all this time because of a woman.  Little Helen, Prince Paris lays eyes on her, he gets a whopping stiffy, steals her away and next thing you know we’re neck-deep in this shit.”

The work on a while longer.  Finally, Melene speaks up again.

Melene looks up at the sun.

They climb up scaffolding, carrying several planks and a box of tools, to begin work on the next level.

MELENE:              “You know they will.  There just isn’t any way they’ll be stupid enough to take this thing inside the city, much less leave it alone all night.”