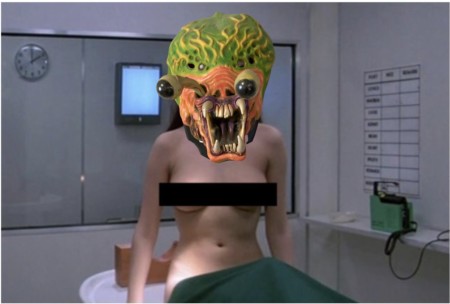 Ha ha! Scarred you for life! Scroll down quickly! Quickly!

What is it about vampires? They are so incredibly popular as the bad guys. They suck the blood or the soul out of you, or in the case of Colin Robinson from What We Do in the Shadows, he bores the energy out of you with his accounting knowledge. There are so many interesting ways to reinvent the vampire which blossomed from Count Dracula. (Who himself was a retelling of stories as old as time).

So who was that space vampire girl? It was Mathilda May, a French (oui oui!) actress who bared her boobs. How perfect was she?  Even in the movie, she was called perfect by one of the NASA spacemen. Now her perfection has been verified by science! Or at least by some random internet site. Useless trivia #1: Mathilda May didn’t even know English and during this film she had to be taught her lines phonetically. I think that added to her otherworldliness.

We are getting to watch the uncut version tonight! A full 116 minutes. So even if you have seen this film before, there may be about eight minutes of material you missed previously. This includes a much longer love scene between Carlsen and the Space Vampire Girl. Exciting! Lots of other bits were cut as well in the American/cable version, all too numerous to mention here. Go see IMDB if you really want to see a ridiculously complete list of the cuts. It’s crazy.

Know what else was great in this movie? The vampire zombies! Absolutely fantastic zombies! John Dykstra was in charge of the effects, but I was unable to locate exactly who came up with that classic wrinkled vampire zombie design. Maybe it was John. Whoever did it, big kudos.

Colin Wilson wrote the book Space Vampires upon which Lifeforce was based. He was unhappy with the way the film turned out. He wrote, “John Fowles had once told me that the film of The Magus was the worst movie ever made. After seeing Lifeforce I sent him a postcard telling him that I had gone one better.”

What’s with that, Colin?  The movie is great. A cult classic. His book is also great.  If you try to take a book and force it into a movie with every chapter and line of dialog, it fails. If you don’t believe me, get the completely faithful version of The Shining which is so bad it can only be found at the Stanley Hotel gift shop. Watch that and tell me it is superior to the Kubrick movie. You must change your approach when going to screen, and Lifeforce did this well.

Useless Trivia #2: Billy Idol was offered to role of one of the vampires. He had to turn it down due to touring commitments. So Mick Jagger’s brother Chris Jagger played the other vampire.

Useless Trivia #3: Some dude named Patrick Stewart was in this film too. Wasn’t he in Star Trek? Played a Klingon or something?

Please enjoy tonight’s film. Or don’t! Everything is voluntary!  Next week is The Selling, a horror/comedy about a realtor trying to sell a haunted house.