ELON MUSK WANTS TO BUY TWITTER, WHINY WHINERS WHINE WHINILY: First there’s Axios, who pretentiously and laughably  describe themselves as “Smart Brevity worthy of people’s time, attention and trust.” Next comes “Justice Correspondent” Elie Mystal who, predictably, just repeats the phrase “racist white man;” note that they lowercase “white” and capitalizes “Black” in the response to their own tweet. Then there’s CUNY journalism professor Jeff Jarvis (illustration below) who is clearly overwrought. Speaking of pretentious, Prof Peter Hotez MD PhD, vaccine scientist, author, and grifter totally knows how Musk could better spend his money; note that one of his suggestions involves funding the medical center where Mr Professor Doctor Hotez works. Special shoutout to Hotez fan Anne M. Coulter who thinks Musk “[p]robably leans libertarian – free speech means unregulated disinformation and hate.” Crikey, she’s on to us! Finally, voice of reason Auron MacIntyre observes that “libs are processing the buyout of Twitter through the only two lenses available to them WW II and Marvel movies.” 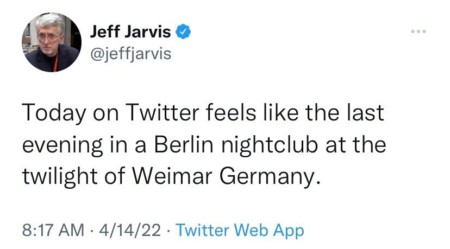 TRIAL BALLOON? SF Chronicle: Colleagues worry Dianne Feinstein is now mentally unfit to serve, citing recent interactions. This doesn’t happen overnight; the significant thing is that they are publicly admitting it so as to get out ahead of the issue to better control it. I also see this as laying the groundwork for the eventual dumping of President Biden on the grounds of mental incapacity.

WHY SEND ANYONE? Politico: The Biden administration is holding internal discussions about sending a high-level official to Kyiv to show further support to Ukraine. It’s a war zone, and it’s not our war. They are up to something. 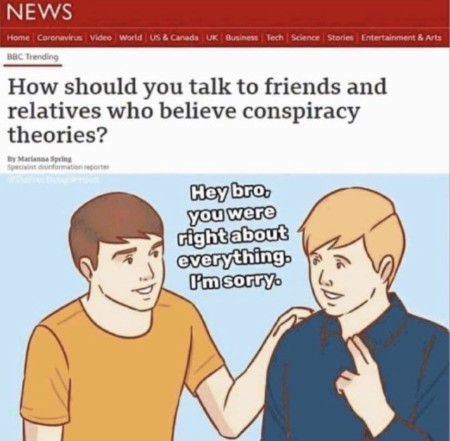 THERE IS NO DEEP STATE, except when there is and we’re damn grateful for it. -Slate

SOME ANIMALS ARE MORE EQUAL THAN OTHERS: Especially if the animal’s owner is POTUS.

ARE SHEEP NOT ENOUGH? Four men in India arrested for having sex with a monitor lizard. The case was taken to the Indian Penal Court. 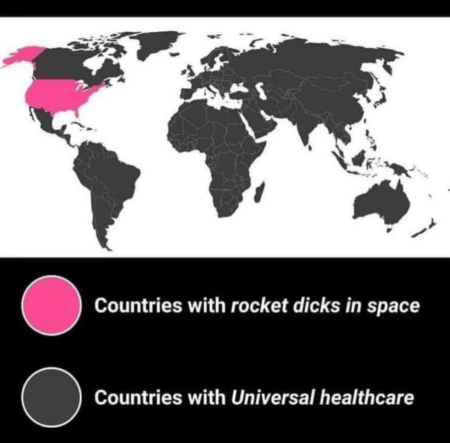 Whiny, petulant, and incorrect. But we keep running this illo to remind everyone that these people exist and hate progress and their betters.

PRIVATE ASTRONAUTS, NOT SPACE TOURISTS: But this will still piss off the people who shared the above illustration on their social media.

STILL CAN’T GET IT UP: While SpaceX continues to fly crewed missions and launch satellites, Boeing needs a valve job.

COOL AF, HOPE IT WORKS: Rocketlab plans to test mid-air booster recovery using a helicopter. That would make Rocketlab the second company to reuse boosters. Full disclosure: I am a Rocketlab investor.

(*) The ending of the video was improvised when the Shatner impersonator didn’t show for the wedding scene shoot.