A Glibertarians Exclusive – Mr. Okpik Goes to Washington, Part I

A Glibertarians Exclusive – Mr. Okpik Goes to Washington, Part I 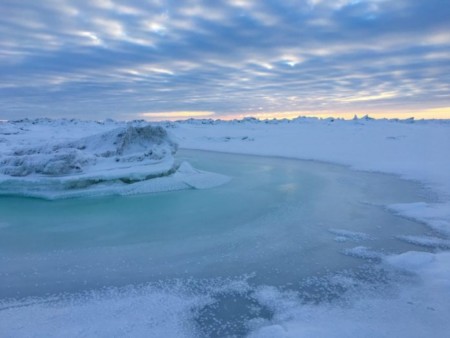 Quinn Okpik looked morosely out over the expanse of sea ice.  He was seated on a chunk of sea ice that had blown up onto the pebble beach earlier in the winter, before the sea had frozen solid.  His brother Tuktu walked up and sat next to him.  A cold wind blew in off the Chukchi Sea. The brothers were two of a kind – short, stocky, like most of the Inuit, with broad faces, black hair and shining black eyes.  Quinn was thirty-seven, Tuktu, thirty-five.

“So much for any jobs in the oil fields,” Quinn grumped.

“Yup,” Tuktu agreed.  “President Harris shut down the whole thing.  All the oil and gas fields.  What did they call it?  An ‘executive order,’ that’s it.  At least we can stay home all year now, instead of going up to the fields.”

“Old Anuniaq says she can’t do that.  She can’t just shut everything down.  Something about the Constitution.”

“Well,” Tuktu pointed out, “she did it.  Not just going to hurt us, either.  Going to hurt the whole state.”

“Nothing we can do,” Tuktu went on.  “All because of some kind of ‘climate change.’  Wouldn’t mind a little climate change around here.  At least if we could fish more of the year.  We may have to.”

“Comes to that, we’ll need more boats, more and bigger.  That means buying them from somewhere or making our own – and what are we going to make them from?  Wood costs too much to have flown up here.  Last year they made us stop whaling.  Remember when that Sea Shepherd asshole was up here filming us?  That got back to Washington and bang, no more whaling.  We been doing it for thousands of years, but bunch of rich people in the forty-eight got all upset, so we got to stop.  It ain’t right.”

“President Harris claimed she could do it under some EPA rule.”

“She didn’t pay that much attention to us up here when she was Governor.”

A distant buzzing slowly grew into the roar of two Wright radial engines – the sole aircraft belonging to Bob Sutter Air Cargo, an ancient US Army Air Force C-47 converted into a civilian cargo hauler, bringing in general cargo from Kotzebue on the regular weekly run.  The brothers turned and watched as the ancient bird settled to the airfield’s one runway with an almost audible sigh of relief.

“Maybe it would be a good thing to go to Juneau.  Talk to those people down there.  Maybe they’d listen.  They’re Alaskans – or they’re supposed to be.”

“What?  Down to Kotzebue?  What good is that gonna do?”

“So’s I can get a ride farther.  Maybe I can get to Fairbanks, then maybe Wasilla, Anchorage, and Juneau.”

“You think these guys are just gonna fly you as a favor?  This ain’t hitchhiking, brother.  And we got no money for plane fares.”

“Won’t hurt to talk,” Quinn said.  He turned and walked off towards the airfield.

The brothers walked to the airfield, arriving just as the last crates were coming out of the old C-47.  They found Bob Sutter, the plane’s pilot and sole owner of Bob Sutter Air Cargo, checking the last of the crates off on a clipboard.  Sutter was a scrawny, grim, weathered man, his eyes crinkled from staring into too many low suns.  He wore a long beard, white with streaks of gray.

“What do you boys want?” he asked.

“I want a ride to Kotzebue,” Quinn said.  At his side, Tuktu nodded agreement.  “Me too.”

“What business you two got in Kotzebue?”

“Juneau?  Why the hell would you want to go to Juneau?”

“It’s the state capitol, isn’t it?  We want to…”  Quinn searched his memory for the phrase.  “We want to… redress the… no, we want to petition the government for a redress of…  of grievances!  That’s it!”

Sutter threw back his head and laughed.  “Are you two nuts?  What makes you think the big heads down in Juneau are going to listen to a couple of raggedy-assed North Slope characters like you two?”

“It’s their job, isn’t it?”  Quinn felt himself growing angry.  “I pay taxes, just like anyone else.  They damn well better listen!  I’m tired of this, I’m tired of people living in big cities in the forty-eight telling us what to do.  We can’t hunt whales, we can only fish so much, now we don’t even have our jobs in the oil fields.  Those people in Washington won’t listen to us, but the ones in Juneau damn well should.”

Bob Sutter regarded the two young men for a moment.  He frowned, then he laughed again.

“Well, fellas,” he said, “you sold me.  What the hell.  Normally I’d tell you two hundred and seventy-five each for fare to Kotzebue, but I want to see if you can talk your way all the way to Juneau.  You’ve got a decent line, I’ll give you that.  Be here in the morning at seven.  I can get you to Kotzebue, and I’m gonna bet that Sam Gibson will take you to Nome.  From there, you might be able to get somewhere – McGrath, maybe.”  He looked up at the sky, already darkening in the early February afternoon.  “From McGrath…”  He consulted the map of Alaska that lived in his bush-pilot’s mind.  “Maybe Wasilla, or at least Willow.  Then Anchorage is just a hop – hell, you can walk it if you need to.  From there you can get anywhere.”

The journey took several days.  The C-47 took them to Kotzebue, where they caught a ride in an old de Havilland Otter to Nome.  From there they were crowded into a Cessna 170 to McGrath, where they waited several days, finally catching a ride with a hobby pilot in an old Piper Super Cub to Willow.

They arrived at Willow late in the day.  “It’s getting dark soon.  I’ll give you boys a ride down to the Willow Trading Post,” the hobby pilot told them.  “You can get a cabin there.  If’n you want to go to Anchorage, not sure how you’re gonna do that, but you can figure it out in the morning.”

“Nobody out of here headed that way?” Quinn asked.

“Nah,” the hobby pilot replied.  “Mostly local stuff out of here.  Some Denali tours, hauling hunters and fisherman out into the bush, stuff like that.  You two were lucky to catch me back from visiting my cousin.”

The next day the brothers walked and hitchhiked to Wasilla, then to Anchorage.  But once they were there, they found they could go no farther on the charity of strangers.  Reluctantly, Quinn and Tuktu put together their last cash resources and managed to find a cheap hotel room for two nights.  Once that was done…

“How are we going to do that?”

“We’re a few blocks from downtown.  Let’s get you on a corner, let you start giving your speech you gave Bob Sutter.  Maybe some folks will chip in to get us to Juneau.”

The plan was to yield unexpected fruit.  Over the first three days, they made just enough to keep them in the cheap hotel another two nights and kept them eating.  Passers-by would stop, listen to Quinn’s spiel, toss a few dollars in the glass jar Tuktu had found and occasionally record Quinn on their phones.

On the evening of the fourth day, a small, pale man in a heavy overcoat approached them.  “Are you the two that have been here on this corner for four days?”

“Here.”  The man handed Quinn a heavy manila envelope, nodded and walked off.

“Plane tickets,” he breathed.  “To Washington.”

“Washington?  As in, Washington, DC?”

Quinn sorted through the rest of the envelope’s contents.  “There’s a note.  Says we’ll have a hotel reserved when we get there.  Someone will meet us at the airport.  Guess somebody put me talking up on the internet, and he saw it.”

Some are building monuments, others jotting down notes

Everybody’s in despair, every girl and boy