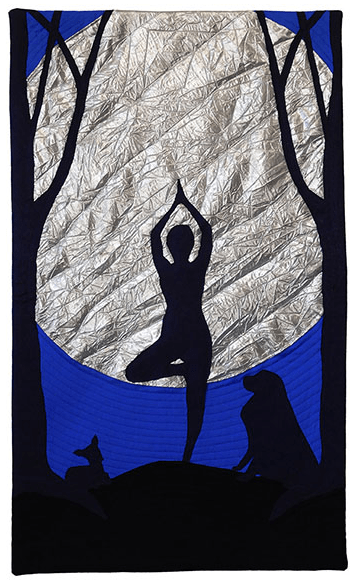 A Modern Artemis (quilt by SP)

I neglected doing anything with my hair for the past 3 months, so as summer approaches, I was terribly annoyed and overheated from its luxuriant length. Jew that I am, I figured, “Hey, I have some clippers, set it to Number 4 and buzz up the whole thing myself. Save $20! Unfortunately, it wasn’t quite that easy for me, and I now sport a haircut which made me wish for Mark Davis’s as a step up.

Something I forgot to mention yesterday: life in a small town. When the ambulance came to our house to take SP to what ended up being her last hospital stay, the cops came to help lifting and carrying. One of them pulled WebDom aside, and said, “My body cam is off, so I’m going to talk to you honestly. Get her off morphine, the side effects are terrible. What she needs is weed.” I love this place.

And everyone loves birthdays, and today’s include a guy who had two wishes and got them both; a guy who was more Catholic than the Pope; a historian who didn’t like (((us))) very much; a guy who proved that comedians don’t have to actually be funny; the guy who beat Hillary; a president who showed us all how brainy he was; a guy who proved that being consistently wrong pays well; a guy whose fame and fortune came from driving around in circles; a guy who definitely needed more range time; and a woman whose Wikipedia photo looks disturbingly like Pocahontas.

That said, let’s see what various links are out and about.

They used sensitive Jews as detectors.

What this country needs is common sense foot control.

Jon Cornyn throws his hat into the ring for the title Dumbest Motherfucker in the Senate.

Crazy eyes and silicone, she’ll have a fine career in law enforcement.

Of course, no credits on the video, but this sure looks like Kongar-Ol, doesn’t it? Whatever, this music made the Old Guy smile.