A Glibertarians Exclusive – Too Many Goodbyes III

A Glibertarians Exclusive – Too Many Goodbyes III

Lieutenant Sally Neal looked up as her replacement entered the “ward” full of wounded men, mostly Marines from the fighting on Cape Gloucester.  “Shift change, already?” she asked.

“You got it, girl,” Lieutenant (j.g.) Ann Foxworthy agreed.  “Go get something to eat and some rest.” 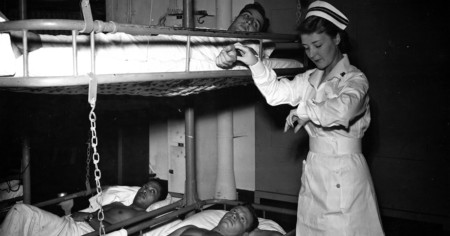 “You talked me into it.”  She looked around the compartment, a hospital ward in name only, really just row after row of steel cot frames hanging from the ceiling of what otherwise would have been a cargo bay in the converted transport ship.

Sally walked to the ship’s wardroom, ate a something sandwich without paying too much attention to what it was – her burps tasted like ham – and collapsed into her hard, narrow bunk in the hard, narrow ‘stateroom’ she shared with five other nurses.

Sleep didn’t come easily.  The fighting on Cape Gloucester had been brutal.  Sally had spent as much time simply consoling the wounded men as treating them, including only an hour before holding the hand of a seventeen-year-old boy who had lost a leg, reassuring him that he was going to be all right, he was going home, yes, his mother will have been told that he’s hurt but he’s alive.

“What an awful business this is,” she muttered to herself.

She didn’t realize she had fallen asleep until a tapping at the steel door woke her.  She sat up, still in her shipboard nurse’s uniform; she had only removed her shoes before lying down.  She took the one long step to the entrance and opened the door.

“Doctor Frank!”  It was one of the ship’s doctors, a specialist in abdominal surgery.

“Lieutenant…”  The doctor looked at a folded paper.  “Lieutenant Neal, is that right?”

“I need you to come with me.  A CPO on one of the light cruisers in TF74 came down with acute appendicitis.  The cruiser is coming alongside now, I’m going over to remove his appendix.  The Pharmacist’s Mate on that ship isn’t up to it.  I need you to come assist.”

There was only one reply Sally could give.  “Yes, Doctor.  Let me get my shoes on.”

“You have any dungarees?  Your whites won’t be very good on the crossing – we’ll be using a high-line transfer.  You’re liable to get soaked.”

“I do,” Sally replied.  “They issued some to us in case we have to go ashore – I haven’t worn them yet.”

“Good.  Get changed, meet me in the Wardroom as soon as you can be there.”

“It’s the Chippewa Falls.”  The surgeon turned and walked down the corridor without another word.

Sally froze for a moment.  The Chippewa Falls, she thought.

She had seen Tom only once in the two years since the attack on Pearl Harbor, when his cruiser had come into Pearl to have some extra AA installed, late in 1942.  She had wangled three days off from the hospital, Tom had managed 48 hours away from the ship.  They had spent two glorious days together, and then Tom had gone back to his ship, and Sally had been sent to the Charity.

“That’s our story,” Tom had told her when he left to rejoin his ship.  “Love – temporarily postponed on account of war.”

When Sally followed the doctor out on the Charity’s deck, some sailors had already fixed the line between the ships.  The narrow, sleek, menacing form of the light cruiser had pulled as close to the hospital ship as prudence allowed, even with the seas fairly calm for the moment.  The crossing was uneventful, with no unscheduled dunkings.  The surgery was, likewise, uneventful.  That’s why they needed a real doc, Sally reminded herself, so it would be uneventful.

Sally waited until they were washing up after the surgery to ask her question.

“Sir,” she said to the doctor as they were drying their hands, “How soon do we need to go back to the Charity?”

Sally looked at the deck.  “Well, the XO on this ship, Lieutenant Commander Braxton.  He’s my fiancé.  I haven’t seen him in almost a year.”

Doctor Frank tossed his hand towel into a laundry bin.  “Well,” he said, looking at the clock on the bulkhead, “It’s 1305 now.  I need to make sure that Pharmacist’s Mate knows what to do now that I’ve removed that appendix – that old seadog of a CPO refuses to leave his ship.  And I wouldn’t mind talking to their captain about a few things.  We could go back, oh, say at 1500?”

“Fine. One moment.”  The doctor stuck his head out into the corridor.  He halted a sailor coming along the passage.  “You, sailor, hold up” he said.  “Son, do you know where your XO is?”

“Yes sir,” the sailor replied.  “Most likely, anyway.  Probably on the Bridge.”

“Can you ask him to come to the wardroom?  There’s someone here who wants to see him.”

The sailor looked at the doctor, then at Sally, still wearing her smile, then back at the Doctor.  He grinned.  “Sure thing, sir.”  He reversed course and pounded down the corridor.

“Come on,” Doctor Frank said.  “I think we passed the wardroom on the way down here.”

Somehow the doctor found his way; Sally knew she was hopelessly lost.  When they entered the wardroom, three ensigns and a lieutenant (j.g.) were seated at a table, cards and cash in front of them.  The doctor spoke to them quietly; they got up, nodded to Sally, and quietly left.

“I’ll see you at 1500,” Doctor Frank said, his tone gentle.  “Enjoy your visit.”  He left, and Sally was alone in the compartment.  She sat down, suddenly and unaccountably nervous.

A few minutes later, the door opened, and Tom walked in.

Sally stood up.  Tom stood there, smiling.  “Somehow,” he said, “I figured when I saw you again, it would be in a field of flowers, with the wind blowing that red hair of yours around.  But this is pretty damn good, too.”  He held out his arms.

Sally burst into tears.  She walked to Tom, hugged him fiercely, covered his face with kisses.  When she stopped for a moment, and looked at him…

“That’s a scar,” she said.  “A scar.  On your head.”  A patch of his close-cropped brown hair bore a streak of white.  Under the white was a jagged, pink seam in the skin of Tom’s temple.

“You could have been killed!”

“There’s a lot of that going around, in case you hadn’t noticed.”

“I’ve hardly had time to notice anything else.”

“You’ve been dealing with the Cape Gloucester mess, then.”

They talked about the action the Chippewa Falls had seen, the capabilities of the Brit admiral commanding TF74, Sally’s duties aboard the Charity, the horrible casualties from New Gloucester.  “Who knows where it will be next,” she said, sadly.

“Well, I hope Admiral Nimitz and General MacArthur know,” Tom pointed out.  “But aside from them?”  He shrugged.  “We’ll go where we’re told to go and do what we’re told to do.”

It wasn’t until she was in the chair, suspended over the roiling water between ships, watching Tom wave, that the loneliness crashed in on her again.  This damn war, she thought bitterly.  When the hell are we ever going to be able to start a normal life?

Purple clover Queen Anne lace
Crimson hair across your face
You could make me cry if you don’t know
Can’t remember what I was thinking of
You might be spoiling me too much love
You’re gonna make me lonesome when you go.