The plate of cheese and bread was exhausted, and the two Americans were on their second bottle of wine.  Caleb Pettigrew, lost in his memories, was still holding forth.

“So, us volunteers, we were organized as the 5th Battalion, and assigned to General de La Motte Rouge’s 15th Army Corps.  We made it to Orléans on the tenth of October.  They tossed us into the defense of the city.  On the tenth and eleventh, we fought for that city, and we sure as hell fought.  I thought the Yankees were tough – hell, the Yankees were tough – but those Prussians, they were something else.  They just wouldn’t quit.”

Caleb emptied his wine glass, then looked at the empty wine bottle and frowned.  He waved for the waiter.  “I’ll get this one, son,” he said, and laid down a few coins.  “Now where was I?  Oh, yeah, Orléans.  What a mess that was.  We were outnumbered – but hell, anyone who followed Marse Bob Lee around for four years was used to that.  Only advantage we had was a better rifle.  The Chassepot was a damn sight more accurate and reliable than what the Germans were using – a “needle gun,” they called it.  One of our guys, a little Belgian called Féront, he killed eighty Prussian soldiers with his rifle, one at a time; little fucker just couldn’t seem to miss.  Then, late that day, our commander, Major Arago, was killed, and the French regulars passed down the signal to retreat.”

The streets surrounding the large open square in the Bannier quarter of Orléans were obscured, partly by long, late-afternoon shadows, mostly by the thick clouds of gunpowder smoke that hung in the air.  Caleb Pettigrew – Caporal Tom Jackson to his fellow legionnaires, Caleb having been promoted and placed in charge of a squad – crouched behind an overturned wagon, peering through the smoke, watching for the advancing Prussians. 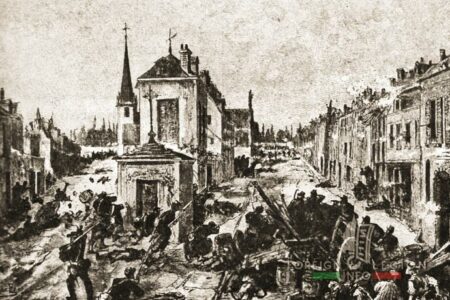 Private Charles Sebastian Diego y Sanchez was lying on the ground beside Caleb.  Private Grant Edward Smythe-Carstairs crouched a few feet away, covering behind the wreckage of a wall.  The Englishman looked up.  “Did you bastards hear that?  The French regulars are sounding the retreat.”

“Fuck that,” Caleb said.  “They won’t be taking this square away from us.”

“Amigo,” Sanchez said, “We wait a few moments longer, we may no longer have anything to say about it.”

The little dago’s right, Caleb thought bitterly to himself.  They were badly outnumbered; the streets were littered with the bodies of dead legionnaires and French regulars.  Down the street, a figure wearing the light-blue uniform of the Bavarian Jägers peered around the corner of a wrecked building.  A French Chassepot boomed from the second floor of a building to the left, and the Bavarian collapsed in a boneless heap.  “That little Belgian Féront again, I’ll wager,” Eddie Smythe-Carstairs observed.

“Very likely.”  Caleb watched down the street, thinking hard.  From somewhere in the rear, a bugle call, Retreat.

“Fuck it,” he said in English, prompting a grin from Smythe-Carstairs and a confused look from Sanchez.  Caleb switched back to his Legionnaire’s French.  “How many men do we have here?”

“Looks like about thirty,” Smythe-Carstairs said, looking around.  “Some from the first company, some from the third.  We’re all mixed up, old man.”

“Sergeants?  None of them, either?  Who the hell is in charge of this mess?”

Caleb heard a voice, high-pitched in fear, shouting from their rear:  “The Prussians have closed ranks behind us!  We are surrounded!”

Well, shit.  Come on, Caleb old boy.  Think.  What would Stonewall have done?

He remembered First Manassas.  Sure as hell.

Caleb checked his ammo pouches.  He had three rounds left, which he handed to the Spaniard.  He laid his empty rifle down.  A dead Legion lieutenant lay nearby.  Caleb slid over to the dead officer, picked up the man’s sword and his Lefaucheux revolver.  He quickly checked the revolver and found it to be fully loaded.

He stayed in his crouch behind the improvised barricade.  “Men of the Fifth Battalion,” he bellowed, loud as he could.  “Fix bayonets!”

Around him came the rattle of bayonets being affixed to the men’s Chassepot rifles.  Down the street, a large body of Prussian and Bavarian soldiers were forming.  They are going to storm our positions.

“We will charge,” Caleb shouted.  “And when you charge, yell.  Yell like Furies!”  Why not, he thought.  Sure scared the hell out of the Yankees.

Caleb paused.  He took a deep breath.  Down the street, he could hear a Prussian officer shouting orders.  We need to get to them before they get to us, Caleb realized.  He leaped to the top of the barricade, sword in his right hand, revolver in his left.  He pointed with his confiscated sword.  A Prussian bullet went past his head, trailing a slight sound, wheat.

Caleb ran in front of the men.  The Prussians and Bavarians were frantically forming a line, maybe a hundred meters away.  It seemed to take a century to reach them.  Bullets whizzed past, missing Caleb only by what was surely a series of miracles.  He ran, boots pounding, pointing with the sword, screaming the Rebel yell.  Around him, legionnaires ran, copying the wild call.  Caleb felt himself filled with an unreasonable, impossible joy.  The boys of the Army of Northern Virginia couldn’t have done it any better.

They lost a third of their number just reaching the Prussians.  Caleb, out of the corner of one eye, saw Smythe-Carstairs go down, but there wasn’t time to worry about his friend.  He led the Legion crashing into the half-formed German lines.  He slashed with the sword.  A German private swung his Dreyse rifle around; Caleb pointed the revolver, awkwardly in his left hand, and put a bullet between the man’s eyes.  Around him, the men of the Legion fought like demons, until, at last, there was no point in going on.  The Prussians were too many; the Legion, too few.

“Cease fire!” Caleb shouted in English.  He shook his head; drops of blood flew from his beard, but at least the blood wasn’t his.  “Capituler!” he shouted in French.  “Surrender!  Déposer les armes!”  Caleb looked around; there were only eight men left to do so.

The Prussians, seeing the dropped rifles and raised hands, stepped forward to take the men of the Legion prisoner.  Caleb laid down his revolver and looked around; there was Sanchez, hands held high.  And there, supported by two of their fellows, was Smythe-Carstairs, a blood-soaked bandage wrapped around his leg.  Caleb nodded.

A Prussian officer approached Caleb.  Caleb looked at the man’s insignia; a major.  Caleb held out his sword.  The Prussian major nodded and accepted it.  “Corporal,” the man said, in fair French, “I am told that you led this charge.”

“I should like to shake your hand,” the Prussian said.  “You and your men are to be congratulated.  That was one of the finest acts of courage I have ever witnessed.”

Caleb shook the man’s hand.  “Thank you,” he said.

Then, impossibly, a volley of bullets crashed into the Prussian’s flank.  The Prussian major clutched at his chest and fell.  Caleb and his comrades hit the ground, scrabbling for their abandoned weapons, but the volley had hit the Prussians and Bavarians.  “Men of the Legion!” Caleb heard a voice shouting from a side street.  “This way!  Run!”  Another volley; the Prussians were reforming, their prisoners for the moment forgotten.  The men of the Legion disappeared into the growing shadows of the narrow street.

A few minutes later, Caleb came face-to-face with their savior; a lieutenant of the Legion, Kara George.  The man was short, swarthy, and impossibly, had a bedraggled flower stuck in the pocket of his uniform tunic.  “Did you men not hear the retreat?” he demanded.

“Can’t say as we did, sir,” Caleb said.  “Must have been too much shooting going on.”

The lieutenant glared at Caleb.  “I should ask your name,” he said, “but I saw your charge.  It is only good we were able to save you from captivity.  I will be bringing this to the attention of the General, of course.”

Five days later, Caleb was surprised to hear of his promotion to Sergeant, “in recognition of conspicuous gallantry.”

Well, Stonewall, he thought after receiving the news.  I hope I did you proud.

Suddenly I turned around and she was standin’ there
With silver bracelets on her wrists and flowers in her hair
She walked up to me so gracefully and took my crown of thorns
“Come in”, She said, “I’ll give you shelter from the storm”