Caleb Pettigrew drained another glass of wine.  He looked up; the afternoon sun was moving along, behind the row of buildings.  He looked over at Philip McGraw.  The boy hadn’t been trying to keep up with Caleb’s drinking, but the South Carolinian, after years of practice, had a high tolerance for red wine.

The old soldier went on:  “Things were kind of quiet for a while after that.  Oh, there was a big old scrap down in southern Algeria, the Battle of Chott Tigri, they called it.  I got promoted again after that, and then again in 1880, mostly just because I hung around a long time.  My buddy Charlie, he made Sergant, and I ended up as Sergant-Major.  We just kind of kept on soldiering together – buddies, you know?  Guys that have ended up facing death together, they end up like brothers, only maybe more so.”

“That’s what my Grandpaw used to say.  He stayed pretty tight with his friends from Stuart’s cavalry, letters, reunions, and such, until the day he passed on.”

“That’s just it.  Anyway, other than that one scrap, we mostly just did training, field problems, saying goodbye to old guys getting out, breaking in the new kids coming in.  Then, in 1883, boy, did the shit hit the fan.  We ended up going half-way around the world, a place called Indochina.  And was that ever a mess!” 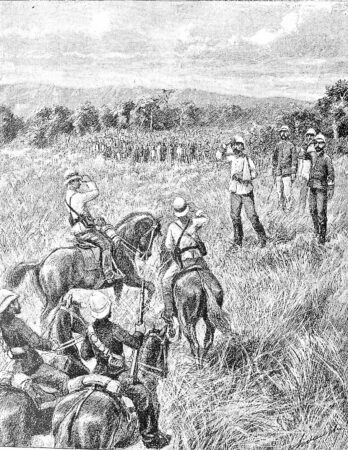 “Can you imagine, the nerve of that General de Négrier?  ‘You, Legionnaires, you are soldiers in order to die, and I’m sending you to where one dies!’  No shit, am I right?  This is where he sent us to die.”

Sergant-Major Caleb Pettigrew – Tom Jackson to the Legion, but after all these years, he still used his given name in the privacy of his own head – scowled at the Canadian upstart who had joined the Legion at Sidi Bel Abbès the year before.  Paul Paige, the boy’s name was, and the one martial skill he picked up quickly was complaining.

“You would do well to keep quiet,” Sergant Charles Sebastian Diego y Sanchez admonished the lad.  “The trees, they have ears.  And those Black Flag cabrons, they have been defeated at Palan, but many of them are still in the field.”

The legionnaires, sent out in a patrol ten men strong, was moving quietly down a jungle path, their Gras Modèle 1874 rifles held at the ready.  The new rifle was pretty much the old Chassepot modified to take a metallic cartridge, but it was far more reliable in the dank conditions of Indochina, which made the men of the Legion fond of the new arm.

“There are too many reports of enemy forces and bandits out here,” Pettigrew whispered harshly.  “And Charlie’s right; some of those bandits are what’s left of the Black Flag Army.  We hold our base at Hải Dương, but we don’t know what’s going on out here in these forests, so somebody has to go see.  That somebody is us.  So shut up and keep your eyes open.”

The patrol pushed on down a narrow jungle trail.

I don’t like this, Caleb thought.  The kid has a point.  He’s a complaining little asshole, but he has a point.  Can’t move into the jungle, or we’d spend all day hacking at the undergrowth to go a hundred yards.  And this damn trail – it’s just made for an ambush.  And they sent just ten of us out here?

They moved in loose order, a couple of meters between each man, close enough to support each other, far enough away so as to make it difficult to hit the entire column with a volley.  But at a bend in the trail, the column closed up, just enough…

Caleb had set a Portuguese Caporal at the head of the column, a skinny, swarthy little man Caleb thought of as ‘that sneaky little dago.’  The man proved to not be sneaky enough for the jungle.  A musket boomed from a ridge where the trail bent to the left, and the man on point went down hard.

“To the front,” Caleb shouted, but the warning was late; a volley raked the column from the front, and another from the right.  The unseen enemy was in an ‘L’ formation, a textbook-perfect ambush.

But the enemy was armed only with muzzle-loading muskets.  They charged, screeching like animals.  The legionnaires fought as only they could, but there were too many of the Black Flag rebels.  Caleb fired a shot into a little man in ragged clothes that charged in from the right, then swung his bayonet to impale another.  The line came apart.  Another boom came from the right as one of the rebels managed to reload.  Caleb saw his friend Charlie go down with a squawk of pain.

Then, there was an explosion of light and pain, and he knew nothing more.

Caleb came to slowly.  He tried to move, then realized his hands and feet were bound.  He opened his eyes and could see only a short span of dirt and trampled grass.  Nearby, he heard incomprehensible talk and guttural laughter.  He bent an elbow and managed to turn face up.

“Hola, amigo,” he heard Charlie’s voice.  “I am glad to see you are still with the living.”

“Only just,” Caleb replied.  His head pounded as though a ten-inch cannon shell has struck it.  “What’s going on?”

“They carried us here,” Charlie replied.  “That is, you and I.  We would seem to be the only survivors.  We are in a small village on a hill, maybe ten kilometers from where they struck us.”

“Why did they take us prisoner?  The Black Flag usually doesn’t bother.”

“I am not sure these are Black Flag, my friend.  They are bandits, yes; if you turn, you will see that they throw dice to see who gets our rifles and gear.”

Caleb took a brief self-inventory.  “Who got me?  Don’t feel like I was shot.”

“I think one of them struck you with the butt of the musket.  I am shot in the leg.  They bandaged me, crudely.  I was awake when they carried us here.  I do now know what they intend to do.”

“I’m afraid I have a pretty good idea.”

The bandits were gathered around a small fire in the center of the village, divvying up the clothing, weapons, and gear of the legionnaires.  Hearing the murmured conversation of the survivors, one of them got up, walked over to where Caleb and Charlie lay bound on the ground, and grinned at them.

“I am Huy Phan,” he said, in passable French.  “I lead the Golden Hand.”  He waved at the ragged band of thugs, as though they were a respectable force.  “We were with Lưu Vĩnh Phúc’s Black Flag Army, until he allowed himself to be pushed out of Upper Tonkin.  We are of Tonkin, not from China, as are the Black Flag Army, so we stay here, we fight the foreign devil invaders.  You are the French Army, are you not?  Tell me your names and your battalion.”

The Tonkin laughed.  He hauled off and kicked Caleb in the ribs, then squatted beside him and pulled out a small, wicked-looking little knife.  “You will tell me,” he said.  “You will tell me everything about your battalion, how many men, where they are.  You will tell me all this and I will kill you quickly.  If you do not, I will give you to my men.  Then your death will not be quick.”

Beside Caleb, Charlie let loose a torrent of Spanish; his long association with the Spaniard allowed Caleb to understand that the Sergant was discussing Huy Phan’s ancestry, his sexual habits, and his relationship with his mother, in addition to offering up several suggestions that were anatomically impossible.  Caleb grinned.

“You should reconsider,” the Tonkin bandit said.  “If you think my offer to give you to my men is an unpleasant one, you should know there are worse things that could happen to you.  I could also give you to our women.  It is said that the Tonkin women have ways to make a man die a hundred deaths.  It has been known to take four, five days.  You do not want that to happen, my friends.”

“I don’t know what you think you can do, even if we did tell you.  The entire French Army is coming this way.  We aren’t looking for little groups of bandits.  We’re looking for the Black Flag Army.  We’re looking to move north.  You think we’d bother with a you?  We won’t even notice you unless you make us.  And that’s what you’re doing right now.”

“So, then, there is no reason for you not to give me the information.”

Caleb scowled.  Then he smiled.  As the Tonkin man stared, eyes wide, Caleb began to sing:

We are a band of brothers and native to the soil, fighting for the property we gained by honest toil.

And when our rights were threatened, the cry rose near and far, hurrah for the Bonnie Blue Flag that bears a single star.

Hurrah for the Bonnie Blue Flag that bears a single star.

Huy Phan straightened up.  He laughed.  Then he pulled an ancient muzzle-loading pistol from under his baggy tunic, aimed, and shot Charlie between the eyes.

In a little hilltop village, they gambled for my clothes
I bargained for salvation, they gave me a lethal dose
I offered up my innocence, got repaid with scorn
“Come in”, She said, “I’ll give you shelter from the storm”