A new release on Netflix is Masters of the Universe: Revelations, billed as a continuation of the storyline and setting originally shown in a series of Filmation cartoons from 1983 to 1985.  If you were a child of the male persuasion younger than 13 back then, odds are you at least knew of the show, if not had at least some of the toys that Mattel put out.  I was 9 years old for most of 1983, so I was right in the demographic for which Mattel was aiming.  I and a good friend had most of the action figures and vehicles, watched the cartoons like crazy, and played with his Castle Grayskull and Snake Mountain sets.  Much of our parents’ money was spent on what were in retrospect pretty cheap toys, and much of our attention was focused on a pretty cheaply-produced cartoons:  all the Heroic or Villainous men were muscular enough to make professional bodybuilders jealous, the Heroic or Villainous women (of which there were few) were identically slender and shapely without being voluptuous, animation sequences like walking and running were shamelessly re-used from one episode to the next, and so on.   Mattel had their reasons for this (minimize expenses, maximize revenue), but none of which mattered to us or to the toyline’s bottom-line:  He-Man toys sold like crazy for quite a few years.

The premise of the setting was rather basic:  A megalomaniacal villain (Skeletor) was determined to become ruler of the planet Eternia by any means necessary.  They key to his goal was the Power of Grayskull, which the royal Prince Adam could call upon using his Sword of Power to become He-Man, the Most Powerful Man In the Universe!  Skeletor had an ever-growing gang of scurrilous henchmen to aid him in his goal of conquest, and He-Man had an increasing assortment of allies to help him defend Castle Grayskull, the repository of the source of magical power of Eternia.  He-Man’s true identity was a secret known only to a select few allies.  Further details were thrown into shows as necessary.

The cartoon was equally basic:  Skeletor would concoct some new scheme to conquer Grayskull, usually with the assistance of some new villain and/or vehicle (bug your parents, kids!), and He-Man would thwart his scheme with the help of a new ally and/or vehicle (bug your parents, kids!)  To help prevent the show from being just a commercial, each episode ended with He-Man or one of his allies advocating for some moral behavior or offering friendly advice — always be honest, be careful around strangers, don’t be judgmental about other people’s differences, etc.  There was no grand storyline underlying the show, so episodes always ended with events in Eternia unchanged: Skeletor and all his henchmen are thwarted but escape, He-Man and the Forces of Good are victorious, and nobody is harmed or changed in any way.

In 2002, Mike Young Productions created a reboot of He-Man and the Masters of the Universe show that aired on Cartoon Network for two seasons.  The animation was far better than the Filmation show, but character designs and voice acting was intentionally done to be familiar to fans of the original series, with only a few exceptions that were changed for the better IMO.  However, they did flesh out the setting in many ways, delving into the origins of He-Man and Skeletor, and many of the setting’s respective heroes and villains.  It also delved into the history of Eternia and Castle Grayskull itself.  I found that show to be largely very good, with only a few minor quibbles.  Each of the two seasons had underlying story arcs, so it was best to watch the episodes in order.

Likewise, MoTU: Revelations is meant to be watched in sequence; events from one episode lead into subsequent episodes, and characters do change substantially as the series progresses.  The overarching story is Serious and Threatens the Universe, while still allowing for plenty of corny one-liners that remind me of the original show.  The dialogue is also crafted with the understanding that the original fans are now middle-aged, without being so mature as to disinterest younger viewers.  The character design is also very good; older fans will have no problems identifying the various characters encountered as the story goes on.  They even include an Evil Warrior called Blast-Attak, who never made it into the FIlmation shows, but was one of the last action figures released as a toy.  He was a robot whose primary ability was to detonate himself to damage foes, then the pieces could reform so he could search out a new group of targets.  Gosh, I can’t imagine why he didn’t show up in the cartoons. 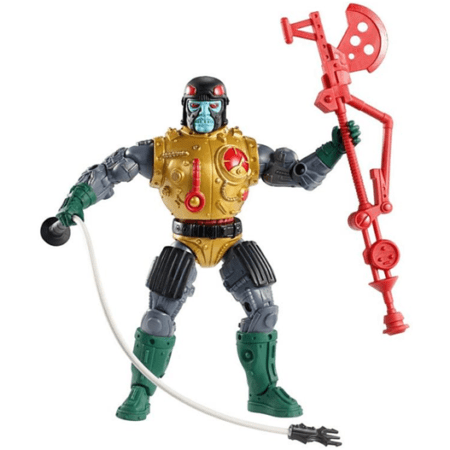 MOTU: Revelations is very specifically NOT a reboot.  It picks up where the old show ends: Skeletor & Co. is still trying to gain the Power of Grayskull, He-Man & Co. are on guard to defend same.  Five episodes of the first season have been released, with the second half of the first season to become available at an as-yet-unannounced date.

During a great battle inside Castle Grayskull, Skeletor and He-Man vanish in a titanic blast of magical energy, and both are presumed dead.  He-Man’s Sword of Power, which was used to absorb most of the blast, is split into two halves, which vanish as well (this is actually canon to the original show and toyline, as He-Man came with a gray half-sword, and Skeletor came with a purple half, each of which fit together to form one sword.)  Suddenly Eternia must deal with the fact that He-Man is no longer around, and the Forces of Evil find themselves scrambling to fill a power vacuum left by Skeletor’s disappearance.  We later learn of a grave threat for which Teela, a former ally of He-Man’s, is recruited to help solve.  Given the disrupted state of Eternia, she is joined in this mission by an unusual group of allies.  Her quest takes her to locations that are familiar to fans, as well as to some locations that have only been written about in the comics.  The fifth episode ends on a significant, and (for the setting) unprecedented cliffhanger.

Overall there is much to like about the show.  The cast of voice actors and their work in the show is, for the most part, excellent.  For example, Lena Headey brings Cercei from Game of Thrones right into the role of Evil-Lyn, a sorceress who was one of Skeletor’s closest allies — and it totally works!  One hang-up I have, though, is Mark Hamill’s role as Skeletor.  Hamill played the Joker in more Batman and DC universe cartoons than I care to list, and he was an absolutely phenomenal Joker.  He also played the role of Fire Lord Ozai in Nickelodeon’s Avatar: the Last Airbender, and I think he crushed that role as well.  But hearing the Joker’s voice  and cackle coming out of Skeletor’s skull head is jarring to me.  The 2002 show’s Skeletor was voiced by Brian Dobson, and he tried to sound like the original show’s Skeletor, but didn’t really nail it, IMO.  Curiously, Alan Oppeneheimer, the original voice of Skeletor, is in the show, but as Moss Man, one of He-Man’s allies, and one who appears in only the first and last episodes.  As it’s been 40 years, it’s possible Alan couldn’t muster the rather nasally voice for Skeletor the way he did in 1983.  Ah well.  I don’t think it’s necessary to have 2021 Skeletor sound like 1983 Skeletor anyhow, but I don’t think Skeletor should remind people of the Joker.

The story is … acceptable.  Eternia and the rest of the universe is in Grave Danger, He-Man is not available, and because some time has passed since he vanished, most of the old guard of Heroes is aging and/or unavailable.  Teela has always been a formidable warrior in her own right, so it’s up to her to take on this Vital Quest.  What we are introduced to is a sort of post-apocalyptic Eternia, and that’s interesting to me.  It definitely allows one to be creative in how people and events might progress in a realm with the long-reigning most powerful forces of Good and Evil gone, presumably forever.

There are some major criticisms about the show that I don’t really share but I will address, as the show is being review-bombed on Rotten Tomatoes.

Primary Critique:  OMG The Show’s Gone Woke!  Much of this is in reference to He-Man being largely absent in the series, and Teela being the main protagonist.  But Teela was always a significant character in the setting. At the start of the show, she was Captain of the Royal Guard, so she held a position of prominence and prestige; she was the daughter of the Sorceress of Grayskull (a fact to which Teela was not privy), and it was strongly hinted that she would be the successor to the Sorceress as the Keeper of Grayskull’s secrets.

Some of this is also due to the fact that a couple of characters have been redesigned as black people, voiced by black actors.  Andra was a bit character from the comics who was a friend of Teela’s, and in this show she’s black.  Likewise, King Grayskull, the original wielder of the Sword of Power and for whom Castle Grayskull is named, now appears as a gigantic black character instead of a blond-haired-blue-eyed-white-guy.  My reaction:  Meh.

A third element of this critique is that Teela’s character design moves well away from the initial familiar look to a significantly-muscled woman with a chiseled jawline and a half-shaven head of hair. 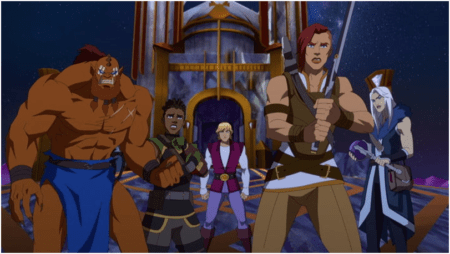 Teela: “I have one sword and two guns!”

Teela’s friendship with Andra (up there next to Beast-Man) is also close.  Very close.  Suspiciously close.  Nothing overt is said or done, but there’s enough to make fan-boys wonder if Teela has switched teams in order to appeal to the LGBTQWERTY audience.  But if Teela’s been snoo-snooing Andra, isn’t it only because Teela’s fetishized Andra because of her race?  Grumbletarian’s take:  Meh.  If it turns out Teela’s shtupping Andra, it’ll probably be gratuitously thrown in, and then it might bug me.  If part one bombs, Kevin Smith probably has more overt scenes drawn and lines recorded to add somewhere into the next installment of episodes so he can call people who hate his show homophobes.  Identity politics infects anything it touches.

Part one of the first season consists of five episodes, each a bit less than a half-hour long, so you can breeze through it in a few hours.  Overall I like the show.  The story is largely decent, the voice acting is quite good, the characters are pleasantly familiar for the most part, and I really dig the state of Eternia after the loss of its Champion.  You meet characters that are totally nods to the people who liked the original canon, and they are drawn with the intent to be easily recognizable to fans.  There are a few things about the show that bother me, mainly related to certain plot points and dialogue choices, but delving into them is likely to reveal spoilers.  If there’s further interest, I could delve into spoiler-heavy reviews and critiques of each of the five episodes, comparing them with events and canon from the 1980’s and 2002 shows.

Even if you’ve never watched He-Man, the show is easy to get into, as they summarize the state of things in the first episode, and you don’t need to know the setting’s history to understand what’s going on and what’s at stake.  It’s worth watching at least for some cheap entertainment.  I won’t call it great, but it’s a decent way to pass a couple of hours. 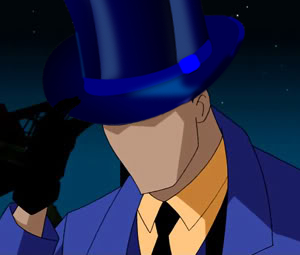