What Are We Reading for August 2021

Time again for the staff of this here site to fill you in on their perusing of the written word.

Having plugged Anderson Gentry’s Nova Roma, I want to give a little equal time to a Glibs author – find out where our favorite adopted term, “Cunte”, came from. See that you go here.

Speaking of Nova Roma, it prompted me to go back and re-read Colleen McCullough’s “Caesar” – 5th book in her ‘Masters of Rome’ series. I wanted to see the fictionalized version of the historical events that led to the end of the Roman Republic. McCullough follows the historical record fairly straight-on (what exists from then) – afterword, she does fill you in as to where she took liberties or filled in a gap. Overall, it is a very good imagining of the Gallic War and the aftermath in Rome. If you like Roman history, give the whole series a whirl.

I finally read this after being a fan of the 1988 film version by Ken Russell. (Which one of the most batshit movies made in a coherent and well-acted way: Jesus on the cross having his arm gnawed on by a giant snake; Amanda Donohue spraying hallucinogenic venom in people’s faces, Peter Capaldi eating earthworms, Hugh Grant.)

The Lair of the White Worm is on a few lists of the worst books ever written. It is nowhere near that bad but I see the essential core of the problem. It’s two short novels that have really very little to do with each other welded into one narrative quite clumsily. One is the story of the White Worm, a huge and ancient intelligent snake thousands of years old that has the ability to take on human form and the other is about An Evil Rich Lord trying to make a beautiful farm girl fall in love with him with Mesmerism, a battle of wills that kills her and drives him mad in the end.

As close to as I have ever found to a slasher movie in book form. As a fan of the slasher film, I’m not sure why it was even published–just take it straight to the screen. Killer clowns, dumb teens, cornfields, it’s really all there in the title. 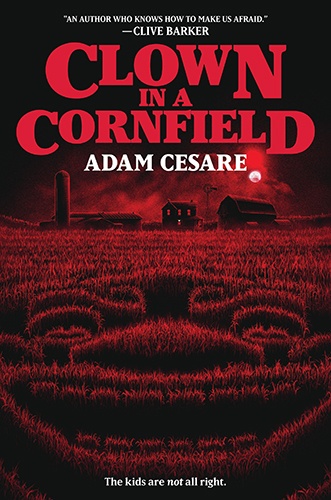