By playing up her eccentricities, mocking her femininity, fundamentally misconstruing her religious beliefs, and laughing off her convictions, historians have made Carrie Nation a paper cutout of the temperance movement: easily crumpled up and thrown away, without ever needing to consider that her grievances actually had merit. Saloon-keepers were acting illegally. Politicians and law enforcement were corrupted by taking bribes to look the other way. Women were marginalized, disenfranchised, and powerless to stop it. A predatory liquor traffic was making money hand over fist by getting men addicted, and then bleeding them and their families to death.

Carrie had experienced all of this firsthand. Her first husband, Dr. Charles Gloyd, was a handsome and decorated Union Army physician. She idolized him. He adored her. They wrote romantic—even salacious—love letters to each other. But it wasn’t to last. Even as a newlywed, Gloyd locked himself up at the tavern or Masonic lodge, drinking till dawn, leaving his forlorn bride “hungry for his caresses and love.” In 1869, after just 16 months of marriage, her beloved died from alcoholism, leaving Carrie with only her sorrow, a new baby, and a disapproving mother-in-law to care for. A widow at the age of 22, she was penniless, hopeless, and powerless before the law. But from those depths of poverty and despair, she became self-reliant, strong, and willing to fight against unjust subjugation on behalf of the subjugated.

So when it came to her motivations, Carrie Nation always declared them clearly and consistently: “You wouldn’t give me the vote, so I had to use a rock!”

What’s strange is that we still refuse to hear her, believe her, or take her seriously.

An attempt to rehabilitate the image of Carrie Nation, Karen Prime, funkiller, joysmasher, the “moral” core of Prohibition is pretty sickening, even for Slate.

Reminds of Oscar Wilde on foxhunting: “The unspeakable in pursuit of the inedible.” 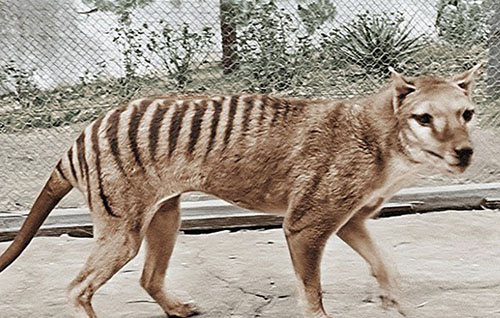 An Australian film archive released colorized footage of the last known Tasmanian tiger, or thylacine, this week ― 85 years after the species went extinct.

The short video was filmed at a zoo in Hobart, Tasmania in 1933 and shows the thylacine, named Benjamin, padding around a small enclosure. Benjamin died in captivity three years later and the Tasmanian tiger was declared extinct.

Although the footage was originally shot on 35mm film, the National Film and Sound Archive of Australia hired an expert colorization team led by Samuel François-Steininger to spruce up the archival footage.

The colorization was a challenge as just 3 minutes of total footage existed of the thylacine, all in black-and-white. François-Steininger relied on drawings, paintings and preserved thylacine pelts in museums to accurately color the footage.

I’m not usually a fan of colorized film footage, but it is pretty neat in this case.

NSW Health has imposed rules limiting people in “NSW Health controlled buildings” to a certain amount of alcohol each day in a bid to “ensure the safety of health staff and residents”.

Mission Australia’s Common Ground building in Camperdown is the latest building where occupants are subjected to the harsh rules.

Residents of the social housing estate have complained that care packages sent by friends and relatives have been searched before they are delivered.

“They are searching all bags and things coming into the building … They confiscated a series of gifts. So things like bottles of spirits, we weren’t allowed to have those and we still (aren’t),” Common Ground resident Robin Elhaj said.

Residents are allowed to receive a ration of one of the following: six beers or pre-mixed drinks, one bottle of wine, or one 375ml bottle of spirits.

Excess alcohol is being confiscated until lockdown rules are lifted.

Residents can consult with a clinician if they think they need more than the allowed limit.

Interior was filthy but it has wiped up okay, the bumper splitter is droopy on one side, the plastic rear bumper is crudely cut and not fully covered by the gasket, there is paint under spray on a couple of the doors.

That’s about it. Sounds bad, but for Tesla, it’s good. pic.twitter.com/rsJS2bBhV9