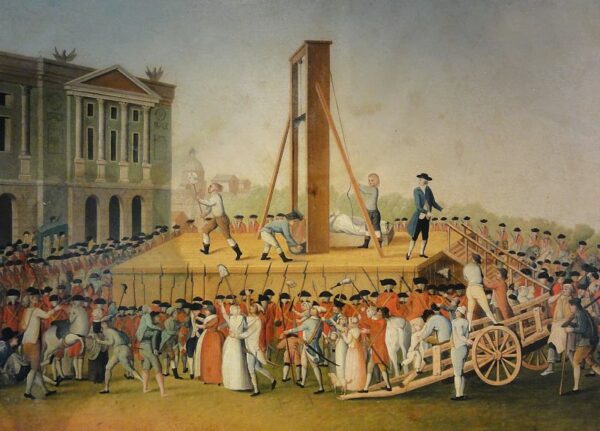 I was chatting up a neighbor who owns the local organic grocery. She has a son in his early teens who, by all accounts, is a bright and creative kid. At school, his class was assigned a project where each student had to put together some sort of display related to historical events. “So he built a guillotine in the basement to show an aspect of the French Revolution, ” she explained. My assumption was that it was a scale model and, given the kid’s reputation, it would be quite detailed and educational.

Bad assumption. “It was full size. And it works. The school was not happy.” So unhappy that he was not allowed to bring it to school to qualify for the assignment. He persisted, and eventually they compromised: he could photograph it. No video of it in action, alas.

An A, of course. Fuck, I need to hang out with this kid. Especially after last night when I discovered while preparing dinner that either WebDom’s or l0b0T’s cats (or both) peed on my herbs, which all had to be tossed. This could have been a useful preventative for any future incidents of this sort.

Anyway, birthdays today include a guy who never let a barrier stop him; a brilliant noir novelist who is likely to be canceled; a guy who always seemed a bit fishy; a guy responsible for more dope being smoked than Jerry Garcia; a pitcher whom I had the pleasure of seeing live only once- and he lost; a piece of shit judge (the name was a clue) who would have fit nicely in the above contraption; a guy who would have made the Supreme Court a much better and more interesting place; a great actor who is a stellar example of the maxim that great actors have empty skulls; and an obscenely talented musician who deserved every bit of fame and fortune she’s achieved.

How does Team Red fuck up their election chances? Shit like this.

“He was a nice guy but funny lookin’ fella. Didn’t know what milk was.”

Department of Who Gives a Shit.

No, actually, we don’t. But keep trying, guys.

This seems like a woman I could have gone for.

Old Guy Music is actually a few songs but given that it’s Molly Tuttle, more is always better. Yes, that’s a very nice dress. I’m sure some double sided tape was used for safety purposes.