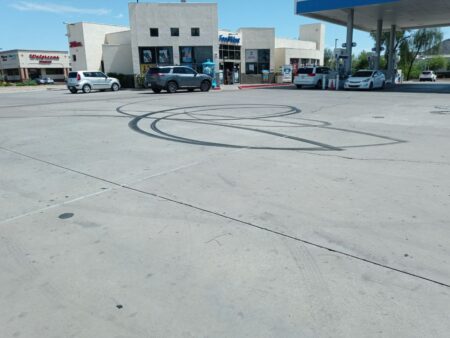 There’s an immigrant-owned gas station in my neighborhood that I have refill my propane tanks.  Nice guy, total stereotype being a Pakistani guy owning a gas station.  Every so often I feel bad for the guy because he may have picked the screwiest neighborhood to start up a business.  Once I walked in and found him yelling at two people that may or may not be on meth for using the bathroom a really long time.  Then QuickTrip (the Mecca of gas station convenience stores) opened up across the street.  Finally, over the weekend I found this.  Poor guy, he doesn’t deserve this shit.

The State Department issues a warning to Americans who wish to visit cities in northern Mexico like Tijuana.  I know what you’re thinking, they always had a warning in place?  Nah, this is beyond the usual shenanigans. “He went to Jared”

Elsewhere in Mexico, they outlawed the “save water, drink beer” culture that is probably the biggest tourist draw to northern Mexico.

Good thing there is no inflation, right?

I’m beginning to think it doesn’t matter where in the world you are, teachers are going to complain about the same thing.

I blame Ronald Reagan for doing a half ass job.

Look at her. She loves it.

Have some tunes and a great afternoon.