What They Call It 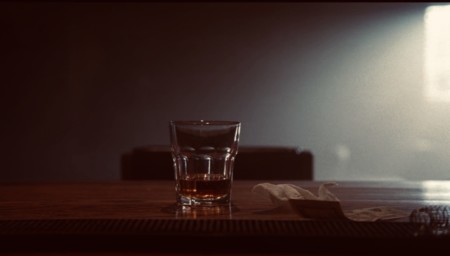 “Why can’t I get a whisky today?”  Charles asked.

“I punched the last of your ration card yesterday Chuck. You know the law.”  The bartender replied.

Charles slouched back into the wooden stool.  The evenings here sometimes got boring but he was determined to wait for the man he was waiting on.

The bar was nondescript like everything else in Vicksburg.  The few lamps that were on flickered momentarily catching everyone’s attention.  The power wasn’t always reliable.  Only a brown-out this time around. They went back to their drinks and conversations.

“Hey, I’m not judging.  After the war a lot of guys fell overboard.”  Bobby replied.  “It’s just not funny anymore.”

“They weren’t exactly meant to be funny.”

“He telling them stories again there Bob?” A large, sweaty man walked over and sat in the shaky stool next to Charles.  Scooting as far forward as his gut would allow.  He looked at Bobby, “ya outta get this fixed.”

“Sorry Mac, I won’t have authorization to purchase the wood until spring.  Be careful.”  Bobby answered.  The man just nodded in understanding before looking back at Charles.

“Tell ya what, let’s hear them again.”  Mac demanded.

“I really don’t feel like going through this again.”  Charles answered.

“What?  Don’t want to tell me about the aliens?  They kidnap you while you were flying your Dauntless and tell you all these amazing things you did in another life?”

“I flew a Mustang, and they weren’t aliens…”  Charles muttered.

“What else?  We won the war while it was still in Europe?  The Soviets didn’t double cross us and ally with Hamilton’s provinces? You had me going until that flying faster than sound thing.  We all know that’s not possible.”  Mac said.

“Is that what that bald midget told you?”  The man snickered and snorted.  “You know better than that, we’re not allowed to attempt the impossible. Commissars hate that.”  Mac slid a heavy paper card riddled with small holes across the bar and set down the clay cup and motioned for Bobby to refill it.  “Maybe you ought not be talkin about it.”

The shutters began to move.  Creaking loudly from their hinges as the wind pressing against them.  Another winter storm brewing.

“Is that them Chuck?  Coming back for ya?”  Mac teased.

Bobby walked over and poured another round of the thick, clear, yellowish liquid into the clay cup.  He pulled a rusted tool from behind the bar and punched another hole in the card,

An unfamiliar man walked in.  Dressed in loose fitting,  olive green coveralls and a brown leather bomber jacket.  His heavy boots echoed through the room with the squawk of the loose floorboards as his feet lifted from the worn planks.  His jacket had a symbol on his left arm of a yellow star with wings, circumscribed by a blue field.  A symbol Charles had seen a few years before in an already forgotten time.  He sat down wearily at the bar.

“Tell me you have something.”  He asked Bobby.

“I am only authorized to distribute whisky.  I need to see your ration card.”  Bobby answered.  The man rubbed at his temples for a moment.

“If I hear more about ration cards…. That’s what everyone east of the Mississippi has been asking me.  You know what the last few days have been like for me?”  He asked.

“Not really.”  Bobby answered after he realized they had all been silent for a time.

“I had to bail out of a B-17.  I wound up dropping a bit far from where I expected, the chute got caught in some trees about 25 feet up.  After cutting myself loose it stormed for a couple days and then I found this cabin.”

“Other side of the river.  The cabin looked empty, and I went in thinking there might be some food.  I found a can of pork-n-beans.  You know how I knew that?  I was a can with a plain white label that said pork-n-beans.  No company logos or anything.  Then I see that three kids were hiding from me. They said their parents got hung–for hunting.  I couldn’t take it from them.  That was the last time I saw food anywhere.”

“Well, the commissars did outlaw hunting–” Bobby went on.

“And everywhere between the south side of Memphis and here since, they keep asking me for a ration card.  Always with the ration card.  It’s gotten to the point, barkeep, where I’m just gonna show you this.”  He casually pulled out an M1911A-1 pistol from under his jacket pocket and clicked off the safety.  It’s business end pointed at Bobby.  “Here is my Goddamn ration card.  Whaddaya got, barkeep?”

All the patrons were taken by surprise.  A few jumped from their chairs and backed away.  Charles instantly recognized the pistol.  He had one like it but it was confiscated after the war.

“Whiskey.  Now that sounds great!”  The man said.  He clicked the safety and returned the pistol back to it’s place behind his jacket.

Hesitantly, Bobby poured the thick yellow liquid into another clay cup.  The man took it and held the cup under his nose.  Charles continued to stare at the symbol on the jacket from the corner of his eye.

“This is whiskey?”  He asked, looking up from the cup.

“Thats what they call it.”  Bobby replied.

The shutters swung open.  Letting the wind whistle into the room.

“What direction do those face?”  The man asked.  Bobby thought about it for a moment before he answered.

“As certain as you are this is whiskey you gave me?”  The man asked sarcastically.

He got up from the bar, and walked over to the windows and promptly closed them.  Securing them shut, he did the same to the door that he entered through.

“I’d rather not say.”  The man replied casually.  He took a sip of the whisky.  “Ugh.”  He handed Bobby back the cup.  “This stuff is good if you want to go fucking blind.”

“Won’t say?  Why don’t you tell us more about how you got here.  You say you didn’t land where you expected–”  Mac asked.

“Yeah, I got on the plane in England, flew over France but somehow or another I wound up bailing out and landing in Tennessee.”  The man said.

“You’re starting to sound like him.”  Mac said, giving Charles a less than courteous look.

“Why what have you been telling people?”  He asked Charles.

“He was kidnapped by aliens.”  Mac replied.

“Kidnapped him while he was flying a Dauntless.  Flew into a blinding light.  Talked to people in this white room where he saw himself doing amazing things, in rocket powered planes.”  Mac went on.

Charles gritted his teeth.  That’s not what happened at all.

“Then to top it all off, some German guy and his midget pal tell him this big story of a unified America.”  Mac continued.

A knock came at the door.  Not the kind that somebody does to announce they are there.  It was a single hard thud, that made Charles notice the dust being knocked off the walls.

“German guy, yeah. I met him.  I actually shot him.  In a room full of TVs?”  The man asked Charles.

“You saw yourself right, only like in a movie?”  The man asked.

“Wait, you shot him?  You know what the penalty is here for that?”  Mac asked.

A shutter cracked open and followed by a decrepit hand feeling it’s way around.

“Wait, wait, what’s going on out there?”  Bobby asked. 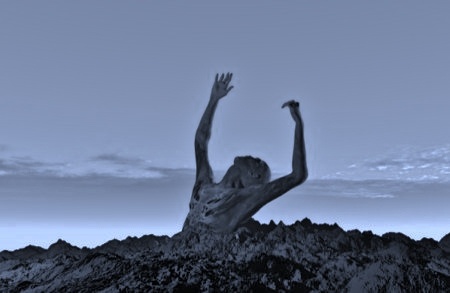 The door swung open slapping the wall with a crack that got everyone’s attention.  Grunts and screams began to fill the room.  Rotting corpses walked in, wearing dusty clothes that tattered.  Some of their limbs only hung because their clothes kept them there.  They weren’t walking aimlessly, but looking for something.

“What the hell is that!?”  Bobby yelled.

“You have a gun, shoot them!”  Mac demanded.

“Bullets don’t work on the dead.”  The man said casually.  The corpses began to knock over tables and chairs.  Making their way towards the bar where other patrons had backed themselves.  The man turned back to Charles.  “You have a note for me, Chuck.  Let me see it.”

Charles lifted his shirt to and turned to show an identical symbol tattooed on his back.  Underneath were plainly written coordinates imbued into his skin:  (38.79N; -100.76W)

“Thank you.”  He looked at Bobby.  “You have a back door?”  The dead began to find what they were looking for.  One corpse had a patron lifted by the neck, and inspected the man’s teeth.

“No.  What are these things?”  Bobby answered.

“They are here to reclaim souls…of those that shouldn’t be on this Earth.”  The living began to fight back with tables and chairs.  Wood cracked, shattered and broke against the dead amid the screams.

“What’s that in English?”  The man asked.

“I don’t know, it’s what they call it.  Just an old Irish legend.”  Bobby replied, he ducked under the bar.  “How are you so calm?”

The man pulled out a matchbook, and lit a single match.

“Because I know you can only kill them with fire.”  He stared blankly as the flame flickered and watched it make its way towards the wooden fuel. “It reacts pure, equally, and without remorse.”

He grabbed the cup of whisky and looked at Mac.

The man threw the whisky into Mac’s face.

“What the hell is wrong with you!?”  Mac screamed as the match lit his whisky soaked face.  The man pushed him into the center of there room where the dead were attracted to Mac’s flailing arms and helpless screams.  Broken wood and tattered, dusty clothes ignited in the center of the room.  The man got up from his stool and began to make his way out. Through the flaming corpses.