The rain fell through the night in a torrent, sideways from the wind pushing it, stinging Isaiah’s ears.  The horse plowed through the muddy trail as best she could, it’s gallop becoming increasingly erratic.  She could barely keep up, but she kept running away from the same eerie feeling as Isaiah.

“We be okay.  Don’t stop now.”  He reassured his mount with a hearty pat.  The horse only continued to breathe heavily.

He hadn’t slept in days.  The was no sense in trying due to the weather.  He left his unit on a trail outside of Vicksburg several days earlier to deliver a message in New Orleans.  The written note rested in a saddlebag, not completely know to Isaiah what it said.  He couldn’t read it, even if he wanted to.  The city was nowhere in sight but Major Greenwood, Isaiah’s commanding officer, told him it would be along the trail.

That was before the storm began.  The rain wouldn’t stop and disoriented every direction Isaiah knew of. No landmarks, no stars, the clouds even covered the sunrise.  Isaiah was lost in the woods, and both he and the horse knew it.  She stumbled a bit and slowed to a trot.  Her heavy steps sloshed through the muck and the dead leaves that scattered the trail.  The wind whistled through the scraggly branches that tapped gently across each other.

The horse stopped.  Isaiah tapped her side to continue on, but she shook her head violently and tapped a hoof against the sodden trail.  He dismounted and saw what was spooking her.  A comb.  Long, thin and silver in color, it lay in the middle of the trail.  It’s radiant glow only intensified through the moonless, rainy night.  Wispy striations across its spine showed thin, luminescent colors when he took a closer look.  He couldn’t tell what it was made of.  The horse tapped her hooves several yards in front of it and began to back away.  She confused Isaiah.  Surely, Major Greenwood had a well disciplined war horse, accustomed to the thundering guns that accompanied battles, how could such an innocent object spook her like this?

The horse whinnied in agreement and began to chomp on her bit.  He set the comb down on the side of the trail.

“Alright now, nothing to worry about.” He said.

She continued to back away.  Her cries only getting louder and the stomping of her hooves in the soft mud.  Isaiah picked up the comb once again and threw it in to the woods.

“See? It gone.”  Isaiah showed her both of his hands were empty.  “I don’t like this place any more than you.”  He walked back over and climbed back up the saddle.

“Isaiah.”  A subtle whisper in the wind ticked the horse ears.  She jumped back, almost throwing Isaiah off.  She regained her feet and began circling around.

“Go, go!”  Isaiah shouted, with a stern kick to the horse’s side.  Barely hanging on the reigns, he rode through the night as quickly as she could.  He could barely make out his name whispered through the whistling winds.  Fantastic figures graced the corner of Isaiah’s eyes, only to disappear when he tried to focus on the silvery shadows.

Miles passed.  The horse’s trot was becoming increasingly erratic.  Her breathing turned into what sounded like more of a cough.  Isaiah could barely make out a tree root crossing the trail.  He braced himself.

“Whoa, there!”  He shouted, pulling the reigns as hard as he could.  She responded too slowly and Isaiah fell forward as she tripped over the root. Sliding head first into the mud, Isaiah could still hear his name through the howling wind.  His horse lay on her side, with a leg mangled in an unnatural direction, covered in mud and dead, yellow leaves.  She heaved heavy, labored breaths through the sound of softly tapping rain.

Isaiah placed a hand on Major Greenwood’s flintlock pistol.  His only other order was not to be captured.  This was to prevent that. He cocked back the hammer and aimed it at her heart.  With a fizzle, the hammer fell onto the wet powder charge.  Her look of wide eyed terror burned in Isaiah’s mind.

“I’m sorry.”  Was all he could say.  He noticed the rain stopped. 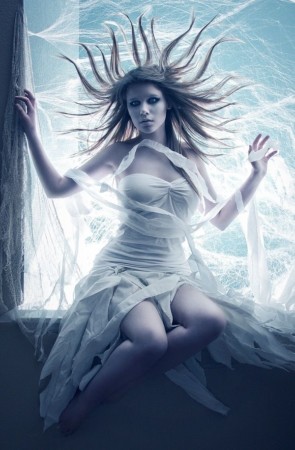 A whispering figure radiated through the broken tree limbs.  She walked barefoot, and slowly amidst the wet earth in silence.   Her graceful stride floated her serenely between the trees.  Isaiah wasn’t sure what he was looking at.  She wore a silvery, gray dress that tattered just above her knees.  Her white skin glowed in the moonless night, contrasting with her blushing red lips.  Her eyes were beautiful, yet disturbing.  A glasslike blue with golden streaks radiating from the iris in a thin corona, that seemed to peer into Isaiah’s soul.   Isaiah was mesmerized by her hands, moving in an almost heavenly grace across a white, satin sash tied around her shapely waist.  Stopping to rest upon a silver comb.  She pulled on it, and ran it through her flowing, red hair.  Revealing more of her beautiful face.

“I’m sorry.  I didn’t know that be yours.  It spooked my horse you see…”  Isaiah rambled.

She placed a finger over his lips and placed the comb back on her waist.    She looked to the ground and touched his face.  Isaiah could hear the faint sound of her weeping.

“I’m sorry, I don’t know what’s wrong.”  He stopped when she once again, gently placed her finger over his lips.

She looked up, to reveal tears of blood.

She smiled.  Revealing rows of black, jagged teeth.  Her jaw dropped when she released an ear splitting shriek.  Isaiah covered his ears but only to discover that it echoed through his head.  He could feel every muscle in his body tighten up.  His heart began to throb, feeling like it would burst at any moment.

She stopped to turn to look at the cloaked figure walking up the trail.  He was dressed in an unfamiliar manner.  Wedge shaped boots, woolen overcoat topped off with a large hat that covered a mess of long wet hair.  He walked through the mud with a swagger that couldn’t be described. The figure pulled another pistol that Isaiah couldn’t recognize.

The woman inspected her dress, now soaked with blackened blood stains.  She looked up at Isaiah with an unpleasant smile, turned and ran.  She disappeared into the woods with a smoking flutter.

“You alright son?”  The man asked.  Isaiah clenched his chest, his heart was beating still but painfully.

“Name’s James Butler Hickok.  My friends call me Wild Bill. You have a note for somebody, where is it?”

The man walked over to the horse and pulled the note from the bag.  He looked at the note confused as he read it.

“Find him in Memphis…”  Wild Bill answered.  He walked back to Isaiah and looked him up and down.  “She came to claim you.  They’ve been chasing me too, because we’re not supposed to be here.  You can’t survive her scream.”

“I know.”  Isaiah replied, with each heartbeat a lesson in pain.  Wild Bill placed his left hand over the S&W model 2 holstered on his right side.

“Should I end it?” Isaiah merely nodded, then answered: