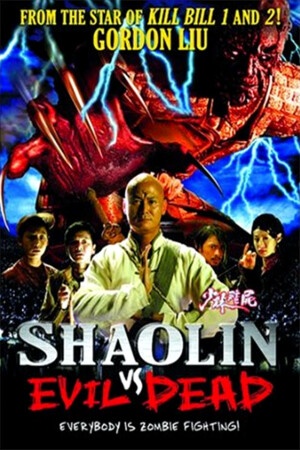 Capitalizing on another popular movie to boost ticket sales…..

I once heard the phrase “You can never have too many hopping vampires.” That is so very true. And this movie has a huge amount of hopping vampires, Shaolin Priests, and evil zombie spirits. Twelve year old me is very pleased.

As stated above in the movie poster, Gordon Liu was in Kill Bill 1 and 2 due to Quentin Tarantino’s enthusiasm for him.  I like Gordon Liu also.  He has been in 121 films in his 40 year career.  He suffered a stroke in 2011 and has stayed out of the spotlight ever since.  His recent experience reads like a bad nursing home debacle, where he handed his finances to the wrong person.  Get better Gordon!  He could direct at the least. If you want to celebrate his career try these easy to find films for starters:

Some notes on this film:

This is the dubbed version so nobody has to stress about subtitles moving at 100 MPH. Yay! A win for slow readers! I had to watch the ending a couple of times – this film just dead ends into a brick wall and then the credits run. I have begun to realize that this is a common feature of Chinese kung fu films. So just be ready, this ending is especially abrupt. It reminds me of the endings of interminable older kung fu films, where the bad guy hits the ground, spits out some fake blood, and the credits start rolling.

So watch!  Or don’t! Everything is voluntary!  Next week, my senility ends as I remember to post Robot Ninja!